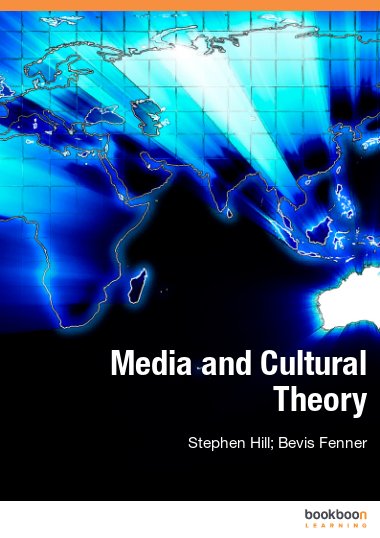 Media and Cultural Theory is an ideal guidebook for undergraduates studying a range of Media and Cultural Studies courses. Covering over thirty theorists, the book is organised into ten chapters, each focusing on a specific theoretical strand. Alongside more traditional forms like film, television and music, the book also makes reference to Facebook, YouTube and MySpace. For the visual learner, each chapter is accompanied by original illustrations that explore some of the more abstract theoretical concepts. Media and Cultural Theory is also useful for students embarking on independent research projects as it contains short synopses of key texts and bibliographical details for further

In this book we trace the development of Media and Cultural Theory from the Enlightenment through to the present day. Along the way we gesture towards a range of contemporary media texts including film, television, journalism, pop music, the Internet. And, indeed, what first attracted us to BookBoon was the opportunity to create a text that we could update and keep fresh; the media industry moves quickly and it is important to be able to revise interpretations in light of this. With this in mind we decided to make the scope of material covered fairly broad, ranging from Edmund Burke’s notion of the sublime to Paul Gilroy’s ideas about race and nationhood. Though roughly chronological, we have organised chapters by theme and ideas. Inevitably there is some crossover between the two and where possible this is gestured to in the flow of the text. However, it is our view that it is often very difficult to isolate specific strands of thought when discussing the complex ways in which media and cultural texts communicate.

The aim of the book then, is to provide students with an introduction to Media and Cultural Theory in a way that is both readable and engaging. So many media students shy away from theoretical application and this is a great shame as it is useful tool to illuminate and enlighten our understanding of the texts we consume. Though the core of the work is grounded in the delineation of key theoretical perspectives, the book is not trying to shed new light on any of the theorists discussed per se. Rather, it is our intention to explore how these theoretical perspectives might inform thinking about contemporary media and cultural production. In this direction, the book can be viewed as a starting point for students, guiding them as to how they might begin to incorporate the seemingly bewildering selection of theoretical perspectives on offer into their own work. Though we have endeavoured to provide the reader with useable précis of each writer’s key work and useful bibliographical advice, it should be emphasised that there is no substitution for reading the original texts. In this sense we have endeavoured to write the book we always wished wish we’d had when we were students! And, for the visual learner Bevis has included illustrations! These are all original works and we feel they bring to life some of the more abstract concepts and ideas explored in each chapter. Further examples of his work can be viewed on his MySpace page.

The diverse range of theoretical perspectives covered in this book is of course a reflection of the varied nature of Media and Culture Theory, which draws upon aspects of sociology, linguistics, psychology, art-history and economics. It is also a reflection of the competing backgrounds of the authors! Stephen has completed a PhD in Cultural Studies, which focuses on the music press; he also teaches Media, English and Sociology. By contrast, Bevis has a Fine Art background and is completing a PhD in Human Geography; he currently teaches Graphic Art and Media theory. Indeed, it is our experience as students, researchers and teachers that has informed the shape and direction this book has taken. For our first collaboration we didn’t want to produce a dry academic text, but rather a lively and engaging read that would hopefully provoke discussion and convey our own personal love of Media and Cultural Theory. We hope you enjoy it!

Jeffery P. Horton
This is surely an ideal guidebook. Very helpful for research and presentations. The author has chosen the key texts perfectly, thus the main point can easily be gotten.
More reviews
Ecrire un commentaire