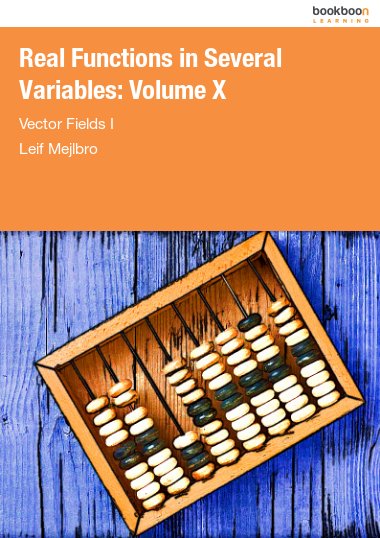 by Leif Mejlbro
0 Reviews
172
Language:  English
The topic of this series of books on "Real Functions in Several Variables" is very important in the description in e.g. Mechanics of the real 3-dimensional world that we live in.
Sign up for free access
Download free PDF textbooks or read online. Less than 15% adverts
Free 30-day trial
Business subscription free for the first 30 days, then $5.99/mo
Share
Description
Content

The topic of this series of books on "Real Functions in Several Variables" is very important in the description in e.g. Mechanics of the real 3-dimensional world that we live in. Therefore, we start from the beginning, modelling this world by using the coordinates of R3 to describe e.b. a motion in space.

The theory and methods of these volumes on "Real Functions in Several Variables" are applied constantly in higher Mathematics, Mechanics and Engineering Sciences. It is of paramount importance for the calculations in Probability Theory, where one constantly integrate over some point set in space.

It is my hope that this text, these guidelines and these examples, of which many are treated in more ways to show that the solutions procedures are not unique, may be of some inspiration for the students who have just started their studies at the universities.