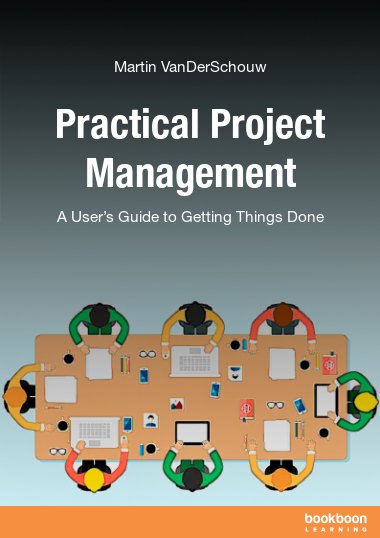 A User’s Guide to Getting Things Done

by Martin VanDerSchouw
61 Reviews
(61 ratings)
2 Reviews
127
Language:  English
Practical Project Management – A Users’ Guide to Getting Things Done is written for those seeking real-world advice executing projects.
Sign Up
Professional Plus subscription free for the first 30 days, then $8.99/mo
Buy the eBook :
Access to this title on the bookboon platform
Share
Description
Content
Reviews

Practical Project Management – A Users’ Guide to Getting Things Done is written for those seeking real-world advice executing projects. In simple, clear language, Practical Project Management provides templates, tools, and practices in a time-sequenced approach. It focuses on those items that provide the highest payback in the shortest amount of time. The author also examines what causes most projects to struggle and provides detailed insights on avoiding those pitfalls. From communication and leadership, to methodologies such as waterfall and Scrum, and advanced measurement techniques such as Earned Value, if you want to improve your management of projects this book is for you.

Martin VanDerSchouw currently serves as the President & CEO of Looking Glass Development. With over 20 years of experience as an executive Mr. VanDerSchouw is one of the most recognized names in leadership and performance management.

Mr. VanDerSchouw and his work have appeared in publications such as Forbes Magazine, Interactive Week, Virtual Finance, PM Network, the LA Times, the San Francisco Chronicle, the San Jose Mercury News, and many others.

From NASA and Lockheed Martin to Chevron, Shell, First Data, Wells Fargo, Western Union, IBM, Microsoft, the U.S. Military, the U.S. National Park Service, and many other of the world’s largest and most successful organizations have relied on Martin to develop leaders and improve performance.