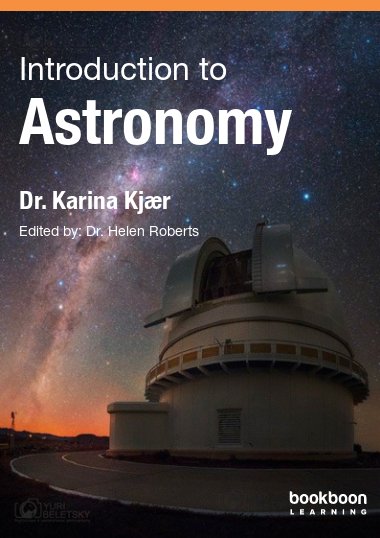 by Dr. Karina Kjær
13 Reviews
(13 ratings)
170
Language:  English
This book provides a comprehensive tour of astronomy at an introductory level. Observational facts are balanced against the physics behind, where discussions are kept at a fundamental level.
Sign up for free access
Download free PDF textbooks or read online. Less than 15% adverts
Free 30-day trial
Business subscription free for the first 30 days, then $5.99/mo
Share
Description
Content

This book is aimed at first year university students. The comprehensive tour through astronomy stretches from the solar system to the stars, which are followed from infancy to their spectacular supernovae ends. Observational facts are balanced against the understanding of the physics behind, where the discussions of physics are kept at a fundamental level. The astronomer’s basic tools and challenges are briefly described, familiarising the reader with the terminology of this science.

Dr. Kjær is a Danish national, who has been passionate about science since childhood. In 2001 she obtained a Bachelor degree in Science and in 2003 a Master degree in Astronomy from the University of Copenhagen. During these studies she worked as a research assistant and participated in observing runs both on La Palma (Canaries) and La Silla (Chile). Furthermore, in 2002/2003 she taught Astrophysics at the Technical High School of Copenhagen, for which she also developed the educational material.

In 2004 Dr. Kjær moved to Munich and started a PhD position at the European Southern Observatory (ESO). While in Munich Dr. Kjær enrolled at the Ludwig-Maximillian Univeristy (LMU) and in the International Max Planck Research School, both of which she graduated from in 2007. From LMU Dr. Kjær obtained the degree Dr. rer. nat. with honors. After her studies Dr. Kjær was awarded a research fellowship from the Carlsberg Foundation, which was graciously hosted by Queen’s University Belfast.

Dr. Kjær researches supernova, and in particular SN1987A’s transformation to a supernova remnant. While working at ESO she was one of the first to make use of an integral field spectrograph on an extended object. Her observations lead to the discovery of the shape and movement of the inner supernova ejecta, which has implications for explosion mechanism models and symmetries therein.

Currently Dr. Kjær is living in Munich, where she writes books and takes care of her two young children.