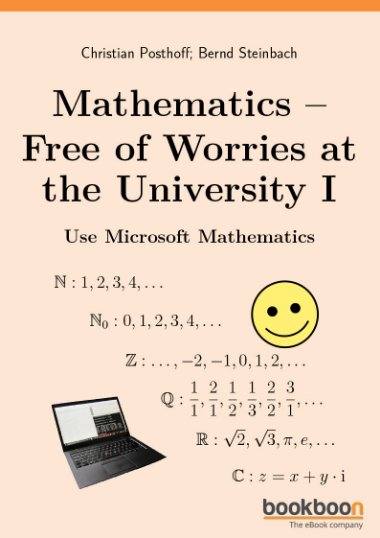 Mathematics - Free of Worries at the University I

Bernd Steinbach studied Information Technology at the University of Technology in Chemnitz, Germany, where he graduated with an MSc in 1977, a PhD in 1981, and with a Dr. sc. techn. (Doctor scientiae technicarum) in 1984 for his second doctoral thesis from the Faculty of Electrical Engineering. In 1991, he obtained the Habilitation (Dr.-Ing. habil.) from the same Faculty. Following this, he worked as a research engineer, developing programs for test pattern generation for computer circuits at the company Robotron. He returned to the Department of Information Technology of the Chemnitz University of Technology as Associate Professor for Design Automation in Logic Design. He is currently, and has been for more than two decades, the head of a group that developed the XBOOLE software system and the head of the Steinbeis Transfer Center of Logic Systems in Chemnitz. He has been a Full Professor of Computer Science/Software Engineering and Programming at the Freiberg University of Mining and Technology since 1992. Professor Steinbach is also the co-author and editor of ten books, and has published more than 250 papers in books, journals and proceedings. He has been the initiator and general chair for more than 20 years of a biennial series of International Workshops on Boolean Problems (IWSBP), which started in 1994.