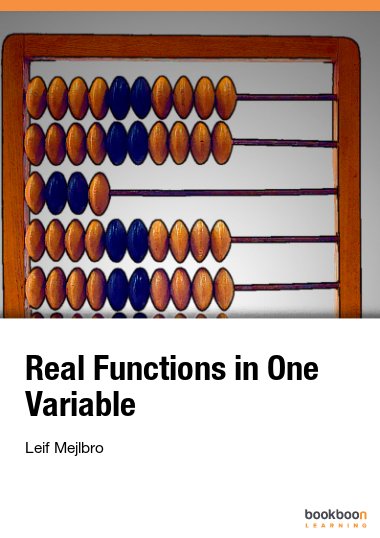 Real Functions in One Variable

The publisher recently asked me to write an overview of the most common subjects in a first course of Calculus at university level. I have been very pleased by this request, although the task has been far from easy.

Since most students already have their recommended textbook, I decided instead to write this contribution in a totally different style, not bothering too much with rigoristic assumptions and proofs. The purpose was to explain the main ideas and to give some warnings at places where students traditionally make errors.

By rereading traditional textbooks from the first course of Calculus I realized that since I was not bound to a strict logical structure of the contents, always thinking of the students’ ability at that particular stage of the text, I could give some additional results which may be useful for the reader. These extra results cannot be given in normal textbooks without violating their general idea. This has actually been great fun to me, and I hope that the reader will find these additions useful. At the same time most of the usual stuff in these initial courses in Calculus has been treated.

When emphasizing formulæ I had the choice of putting them into a box, or just give them a number. I have chose the latter, because too many boxes would overwhelm the reader. On the other hand, I had sometimes also to number less important formulæ because there are local references to them. I hope that the reader can distinguish between these two applications of the numbering.

In the Appendix I have collected some useful formulæ, which the reader may use for references.

It should be emphasized that this is not an ordinary textbook, but instead a supplement to existing ones, hopefully giving some new ideas in how problems in Calculus can be solved.

It is impossible to avoid errors in any book, so even if I have done my best to correct them, I would not dare to claim that I have got rid of all of them. If the reader unfortunately should use a formula or result which has been wrongly put here (misprint or something missing) I do hope that my sins will be forgiven.