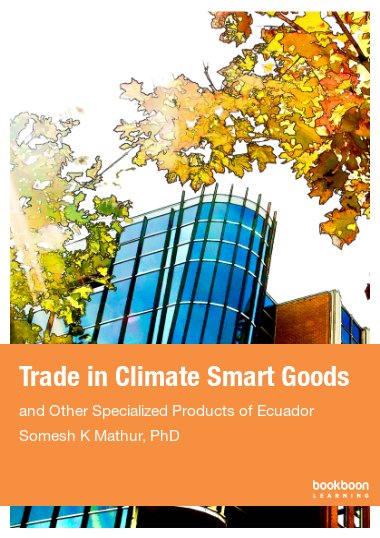 and Other Specialized Products of Ecuador

The book discusses national and international policies for promoting Climate Smart Goods (CSG) trade and limiting Green House Gas (GHG) Emissions in the wake of Global Economic Downturn and Natural disasters striking countries - just like we saw in Japan. The study uses trade indices to identify some of the CSG and specialized products of Ecuador, SMART analysis for evaluating the benefits of Preferential Trading Arrangements and Gravity model (with theoretical justification) for working out the export potential of CSG and the specialized products of Ecuador. The study shows that trade, growth and environmental sustainability have limited trade off between themselves.

Somesh K. Mathur, PhD has nearly eleven years of teaching and research experience at the Department of Economics, Jamia Millia Islamia (Central University), Delhi prior to his joining the IIT Kanpur (www.iitk.ac.in) in 2008. While teaching at the Jamia he completed his M. Phil and PhD degrees in economics from the Centre for International Trade and Development, JNU(Jawaharlal Nehru University, New Delhi). He joined as Fellow at the RIS, Ministry of External Affairs, Government of India in April, 2006 on deputation from the Department of Economics, JMI for two years. In 2008, he has joined on permanent basis IIT Kanpur as Assistant Professor of Economics in the Humanities and Social Sciences (H&SS) department of the IIT Kanpur. At present he has been elevated to position of Associate Professor of Economics, HSS, IIT K.