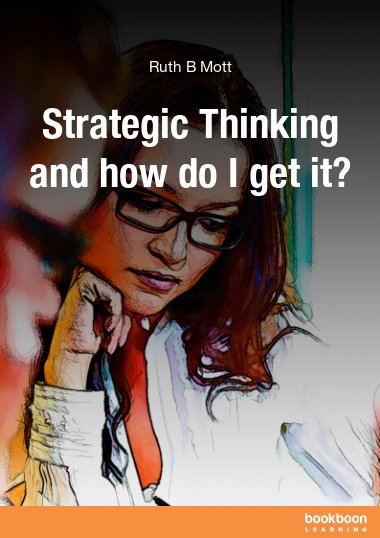 Strategic Thinking and how do I get it?

Strategic Thinking is complex but can be learned. Some can develop a deep understanding of the process. Others can understand some elements of the process. Either level is of significant benefit in business and personal interactions as well.

This book provides the reader with clear explanations of the necessary skills, real life examples, and exercises to help develop their own Strategic Thinking abilities.

Amit Vinchhi
Nicely explained in simple language and with good examples. I really enjoyed reading the book.
DR. LUCIA M. RAMOS
very essential to my work as director of Career Placement & Industry Linkages.
David
Crisp, Clear, and Simple. A call to action. Anyone can do it and everyone should. I am following the exercises in this book today!
More reviews
Написать отзыв
home.book.about_author

Ruth Mott has been a successful consultant and Executive Coach for 16 years.

As an Executive coach Ruth works with individuals and professionals dealing with the complex issues in the workplace.

Ruth has a multifaceted background. Prior to becoming an executive coach, she spent several years as an executive in the healthcare industry, and an administrator, producer and director in public television.

Ruth led a statewide committee through the development and passage of new healthcare legislation that ultimately affected every resident of the State.

In public television Ruth became an expert at designing and delivering clear, concise, compelling messages, and teaching others how to do the same.

In addition to enjoying her work, Ruth is an avid cinema-goer, a theater lover, supporter of the arts, non-profit organizations and an animal lover. She has two children, and her life has been enhanced greatly by her two grandchildren!!

In 2012, Ruth authored a book entitled “I Love You – Now Get Over Yourself” addressing the 7 most common issues her clients bought to her. Each chapter is one issue and contains a case study and a workbook. It is available on Amazon.