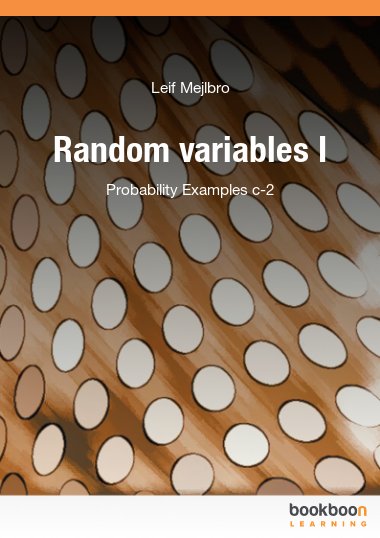 This is the second book of examples from the Theory of Probability. This topic is not my favourite, however, thanks to my former colleague, Ole Jørsboe, I somehow managed to get an idea of what it is all about. The way I have treated the topic will often diverge from the more professional treatment. On the other hand, it will probably also be closer to the way of thinking which is more common among many readers, because I also had to start from scratch.

The topic itself, Random Variables, is so big that I have felt it necessary to divide it into three books, of which this is the first one. We shall here deal with the basic stuff, i.e. frequencies and distribution functions in 1 and 2 dimensions, functions of random variables and inequalities between random variables, as well as means and variances.

The prerequisites for the topics can e.g. be found in the Ventus: Calculus 2 series, so I shall refer the reader to these books, concerning e.g. plane integrals. Unfortunately errors cannot be avoided in a first edition of a work of this type. However, the author has tried to put them on a minimum, hoping that the reader will meet with sympathy the errors which do occur in the text.