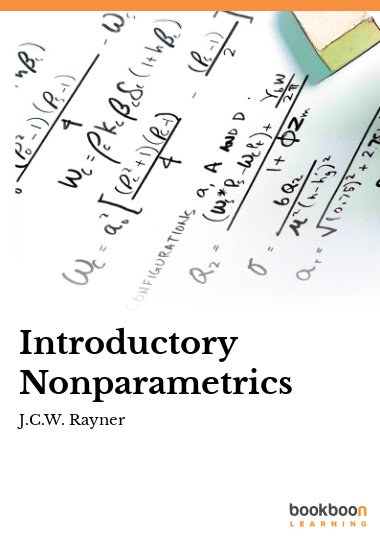 Introductory Nonparametrics gives a gentle introduction to nonparametric hypothesis testing. It describes some simple tests, such as the sign and runs tests, and the Kruskal-Wallis, Friedman and Durbin tests, tests of the most frequently encountered experimental designs, the completely randomised, randomised block and balanced incomplete block design respectively. Permutation testing, a fundamental nonparametric tool in its own rite, is introduced to calculate p-values for the tests discussed. A companion text gives detail of R code used throughout Introductory Nonparametrics.

DJ Best PhD
This is an excellent introductory nonparametrics text. Explanations are clear, real data is often used and there are detailed solutions to the chapter exercises. Of particular note are the use of the free R software, many examples of the use of orthogonal polynomials, discussion of permutation tests and new nonparametric ANOVA. These 4 features are either not covered or covered only briefly in alternative texts. I note the author intends a companion advanced nonparametric text and perhaps in that advice on how to handle missing values and examples of data plots could be given. D.J. Best, PhD
Eric
This book is a must for a great introduction to non-parametric testing by one of the masters of the field. The book describes each of the key testing procedures with easy to follow examples.
More reviews
Schrijf een beoordeling
About the Author

John’s prime research interests are goodness of fit (assessing statistical models) and nonparametric statistics. He is the lead author of Smooth Tests of Goodness of Fit: Using R and A Contingency Table Approach to Nonparametric Testing. He has written over 150 research articles and books, many with his long-time friend and colleague John Best.

Now in his 71st year, John exercises moderately every day with the aim of participating in a weekly parkrun. These are timed 5km runs at venues all over the world. Last year he ran under 25 mins several times and, once, under 24 mins!