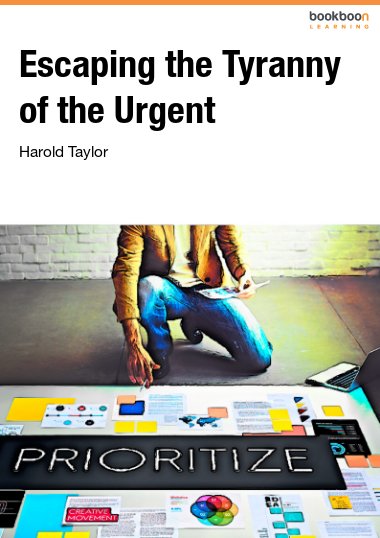 Escaping the Tyranny of the Urgent

by Harold Taylor
0 Anmeldelser
36
Language:  English
This eBook explains how to escape the tyranny of urgent tasks that keep you from working on the important ones – primarily by preventing them from becoming urgent in the first place.
Sign Up
Professional Plus subscription free for the first 30 days, then $8.99/mo
Kjøp eBoken:
Ingen reklame inne i boken
Share
Description
Content

We live in a constant struggle with the urgent and the important. Most of us know the difference and are anxious to get the important things done. But we are plagued by urgent items that seem to pop up from everywhere, putting the important tasks on hold. This decreases our effectiveness, and in turn our results. This e-book explains how to stop most of the tasks from becoming urgent in the first place, and how to handle any remaining urgent items as they appear, while still completing the priority tasks.

Harold Taylor, CSP, president of Harold Taylor Time Consultants Ltd., and now operating as Taylor In Time, was a Quality Control Supervisor and Plant Manager in industry for 12 years and a teaching master at Humber College of Applied Arts & Technology in Toronto, Canada for eight years before launching into the consulting business. He has been speaking, writing and conducting training programs on the topic of effective time management for over 35 years. He has written over 20 books, including a Canadian bestseller, Making Time Work for You. He has developed over 50 time management products, including the popular Taylor Planner, which has sold in 38 countries around the world. He has had over 300 articles accepted for publication.
A past director of the National Association of Professional Organizers, Harold Taylor received their Founder’s Award in 1999 for outstanding contributions to the organizing profession. He received the CSP (Certified Speaking Professional) designation in 1987 from the National Speakers Association. In 1998 the Canadian Association of Professional Speakers inducted him into the Canadian Speaking Hall of Fame. And in 2001, he received the first Founder’s Award from the Professional Organizers in Canada. The award has been named in his honor.
Since 1981, when he incorporated the original time management company, he has personally presented over 2000 workshops, speeches and keynotes on the topic of time and life management.
Harold lives in Sussex, New Brunswick, Canada. He writes e-books for Bookboon.com (25 to date), some of which have been translated into other languages, publishes a weekly blog at his website (also posted on Facebook & Twitter), a quarterly time management newsletter for his 2000 plus subscribers, sends out weekly tweets, and speaks to senior’s and other groups on “growing older without growing old” in addition to “time and life management.”
He is active in his local church, a member of the board of directors of Sussex & Area Chamber of Commerce, president of the Fundy Silverados Friendship Club, writes a column on business in the Kings County Record, and performs additional volunteer work in his spare time.