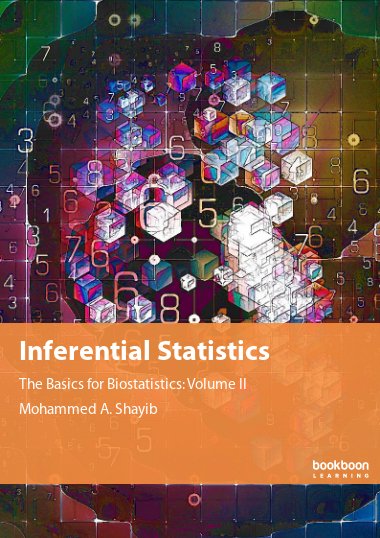 The Basics for Biostatistics: Volume II

The Medical Field, as other fields, is full of data of all types. The Basics for Biostatistics is written to introduce to the medical reader, the tools and procedures for analyzing the collected data, randomly or by experimentation. The Manuscript introduces the Concepts, Definitions, and Terminology of Statistics, in an easy presentation to read and use efficiently. With that many software tools and programs, as well as calculators, the minimum mathematical background barely surpass college algebra. The Basics for Biostatistics should prepare the reader to make a good decision based on data.

After I graduated from The Evangelical National Institute, High School, Sidon, Lebanon, June 1963, I was awarded a scholarship by UNRWA to continue my college degree. This scholarship was based on my academic record that was kept by the office of UNRWA, Beirut, Lebanon, since I was a Palestinian refugee living in Lebanon after the 1948 Arab-Israeli war. I had my grade education at the UNRWA schools in the Palestinian camps in south Lebanon, which was partially supported by UNRWA.

My scholarship was transferred to Egypt, and I enrolled in the College of Sciences, Ain Shams University, Cairo, Egypt. I had my four years of college, and I chose Mathematics as my major. Despite the war in June 1967, during the final exams of my senior year, I graduated with Distinction, First Class honor, and got my B. Sc. Degree. While in Egypt, I was encouraged to pursue a higher degree. I kept that in mind when I was working as a fulltime teaching assistant in the Department of Mathematics, University of Riyadh, (now, King Saud University), Riyadh, Saudi Arabia. After 3 years, I got enough funds to support myself to go to Liverpool University, UK, for my Doctorate degree. On my way to make reservations, I was diverted by one of my friends to check with the Office of AFME, (American Friends of the Middle East, an agency sponsored by the State Department of USA), Beirut, and then go to USA on a scholarship. I did, but it was not immediate. I spent two years at AUB, Beirut, Lebanon. After those two years I got my MS degree.

On August 18, 1972 I left Beirut, Lebanon, to USA, via Cairo airport. I attended New Mexico State University, Las Cruces, NM, USA, for two years before I changed my major of study and went to Texas Tech University, Lubbock, TX. I got another MS degree before I left NMSU.

On August 25, 1979, I was awarded my Ph D in Mathematics, with concentration in Statistics. One week later I was hired by Cottey College, Nevada, Missouri, USA, for one year before I was recruited by Kuwait University, Kuwait. While studying at TTU, I got married on Aug 18, 1974, and had a son, after 4 years.

I worked for 10 years in the departments of Mathematics, and Statistics and Operations Research, Kuwait University, and had three more children, two girls and one boy. I attained the rank of an Associate Professor, and acted as an Associate Chairman before we had to leave due to the Iraqi Invasion of Kuwait, Aug. 2, 1990. We left Kuwait on Sept. 14, 1990 to USA, based on my older son being American by birth. We settled in Lubbock, TX. I worked for TTU part-time for two years before I got a job at Texas Instruments, Inc., Lubbock site, as a statistician and Statistical Process Control Trainer, during which I got certified by ASQ as a CQE. I kept that job for 6 years (1992 – 1998). Economy got bad and I was laid off, and back to TTU as a Systems Analyst for another 6 years. I did not see any prospect for promotion in that job, so I went back to teaching.

I joined Prairie View A&M University, Department of Mathematics, Sept. 1, 2004, where I am now a tenured Associate Professor.