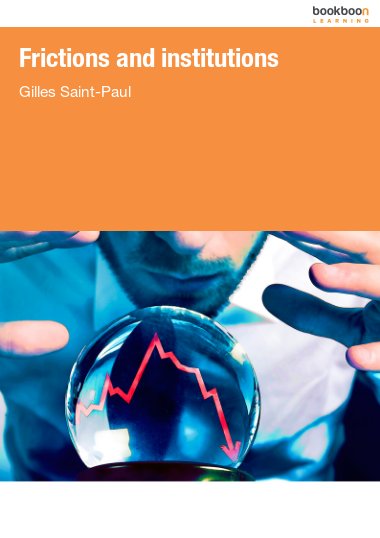 The book introduces the reader to the now largely standard Mortensen-Pissarides (1994) matching model of the labor market, and then builds a number of applications of this model that allow us to study the distributional effects of various labor market policies and institutions. For each of those institutions, the effect on the welfare of different kinds of workers is computed. The institutions that are studied are in turn : employment protection, unemployment benefits, and active labor market policies. The analysis highlights the key role played by wage formation in affecting the distribution of gains and losses from those institutions. The book helps the student mastering the tools of contemporary matching models, and understanding the conflicts of interests between various categories of workers over the design of labor market institutions.

This book is based on my lectures on labor market institutions at Humboldt University Research Training Group and IMT Lucca in August and September 2013. It is a textbook which also contains some original research; the latter is presented in a “raw form”, which is relatively close to the way the ideas were originally formulated. Hence there is little dressing up and sweeping under the carpet, which I believe has pedagogical advantages for an audience of graduate students expecting to develop a career in research.

The goal is to induce the student to work with matching models and to perform the required analysis. This is why many analytical results are presented as exercises for the reader. Also, there is substantial emphasis on proving analytical results as opposed to constructing and calibrating a dynamic stochastic general equilibrium model. Mastering the analytics is important because the economic effects being analyzed are explicitly present in the terms of the analytical equations, and interpreting them correctly is a crucial skill any applied theorist should have.

Gilles Saint-Paul is Professor of Economics at the Paris School of Economics and New York University in Abu Dhabi. He has extensively published on issues relating to unemployment and labor market institutions. He has also published The Political Economy of Labour Market Institutions (Oxford University Press, 2000) and The Tyranny of Utility (Princeton University Press, 2011). In 2007 he was awarded the Yrjo Jahnsson medal, which is given every two years to the best European economist younger than 45.