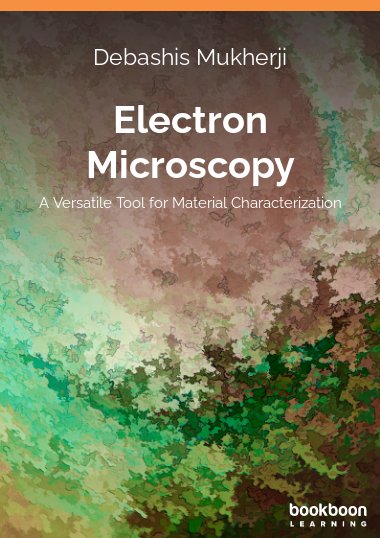 A Versatile Tool for Material Characterization

This book looks at electron microscopy in a comprehensive way covering different types of microscope (SEM, TEM, etc.) and operating mode (HREM, CBED, HAADF, EELS, etc.). It is not a textbook but a student companion. In addition to explaining the subject, it selects important terminology and explain further, keeping in mind the level comprehensible by graduate/under-graduate students. The complex mathematics behind electron microscopy is avoided but explained in a simplified way. The students are referred to original ideas and related sources. They are advised to look at textbooks to broaden knowledge.

I started my research career as a Junior Scientific Officer at the Defence Metallurgical Research Laboratory, Hyderabad, India after my graduation in Metallurgical Engineering from the Indian Institute of Technology (IIT), Kharagpur, India. Transmission electron microscope was one of the major tools for my research on high temperature Titanium alloys and I started learning to use the instrument from the day one of my research career but before that, I only had a vague idea what a TEM is. TEM and Titanium alloy became the main subject for my doctoral thesis. I got my PhD from IIT, Kharagpur in 1987. Shortly after completing my PhD, I moved to Berlin, Germany and worked first as a postdoc fellow and later as a research scientist at the Hahn Meitner Institut and the Technische Universität Berlin. The material for research changed to Ni-base superalloys, but the major research tool remained the same – TEM.

Since then, I have moved around a bit, working at Swiss Federal Institute of Technology Zurich (ETH), Zurich, Switzerland and the Technische Universität Braunschweig (TU-BS), Germany. I also expanded my characterization methods to include techniques beyond electron microscopy to include neutron scattering methods, but the research topic mainly was high temperature alloys for gas turbines. In between, some research on high temperature Ni-superalloys, lead to a patent and some years of research (mainly at TU- BS and ETH Zurich) on nano-particles / nanotechnology, where again electron microscopy (both SEM and TEM) was an invaluable tool. My present research interest is high temperature alloy development, beyond nickel based superalloys for future gas turbines.