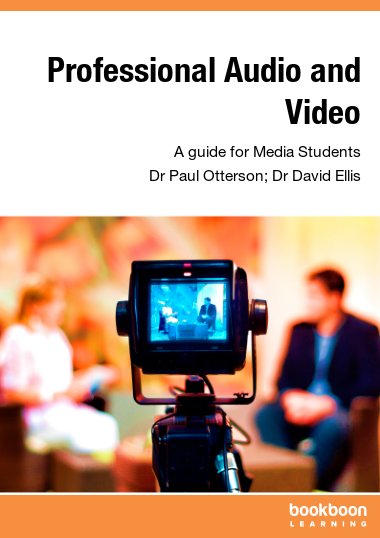 A guide for Media Students

‘Professional Audio and Video’ introduces some of the basic technical aspects and issues of media production. It will primarily be focused on the technology that underpins audio-visual productions, namely video, TV, and radio. It is designed to be of use to students studying a variety of media subjects including audio production, videography, television production and media streaming. The book is split into three parts, Acquisition, Processing and Delivery. Within ‘acquisition’ the student is introduced to the processes behind audio-visual media capture and the basics of lighting. ‘Processing’ covers the basics on compression, (both audio and image), as well as a basic understanding of power, signals and measurement. Finally ‘delivery’ covers the storage and emission of media content. Where possible, processes are described and illustrated with diagrams and graphs, to explain the basic concepts that will enable students to understand how to get the best from their technical equipment.

Dr Paul Otterson (BSc (Hons), MSc, PhD, FHEA) has been lecturing since 1988, as a Principal Lecturer and Programmes Leader for both the Technology Management Group and latterly, the Broadcast Media Technology Group at Liverpool John Moores University. As such, he led the development of ‘Broadcast & Media Production’ and ‘Audio & Music’ degrees that combined technical awareness with artistic appreciation. Now part-time lecturing at LJMU, he started his own small video production company in 2012.

Dr David Ellis (BSc (Hons), PhD, CEng, MIET, FHEA) has been lecturing since 1985. Early work included starting an electronics business unit for the university, reaching Principal Lecturer and Programmes Leader in Electronics, before stepping back to a part-time role in the Broadcast Media Technology Group at LJMU. Early passions for photography, audio and video enabled him to blend artistic elements with technical knowhow. He is a member of the Imaging Science Group of the Royal Photographic Society.

Kirjoita arvostelu
About the Authors