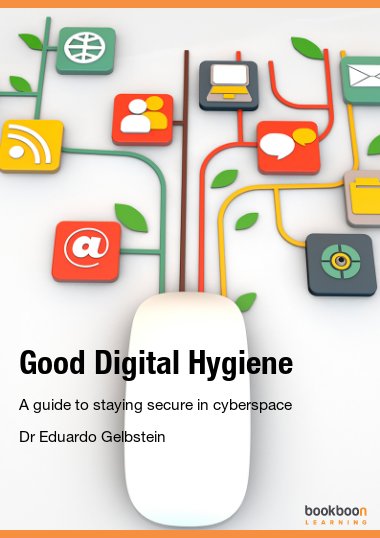 A guide to staying secure in cyberspace

The explosive growth in the adoption of electronic devices by the general population (computers in various forms, smartphones and tablets) is creating an environment where some measures of digital hygiene (such as maintaining strong passwords, carrying out backups, not becoming a victim to phishing, etc.) are needed to protect the devices and the data they contain as well as their owners.

This book presents 39 such measures. None is obligatory but each one that is implemented will help reduce the impact of misadventures in cyberspace.

When Hagel wrote this well-known statement, poor hygiene was not recognised as a contributing factor of disease. Several plagues devastated populations over the centuries and the measures taken by the medics of the time did not focus on hygiene – a surgeon would typically wash his hands after performing surgery, not before (and of course no anaesthesia or antisepsis).

Worse still, those in the medical profession who advocated hygiene (like Dr. Ignaz Semmelweis, in Vienna, around 1840) lost their job by offending the medical establishment suggesting they should wash their hands. Then came Pasteur, Lister and many others and everything changed. Nevertheless, plagues continue to exist and hygiene remains an important factor. The problem however has not gone away: an article in Freakanomics published in 2012 entitled: “How to get doctors to wash their hands.”

We should also remember that bacteria and viruses have evolved in pace with new drugs to manage them and now we have resistant strains that don’t respond to available drugs. Hospital infections are found around the world.

As far as the author is concerned, poor digital hygiene, as introduced here, is at the stage comparable to that existed in Vienna when the Great Plague hit: people are unaware of the need to protect themselves and are not particularly bothered with digital hygiene despite many guidelines and good advice being readily available. In addition, malicious software such as viruses, worms, Trojan horses, etc., continue to evolve faster than the capability of protective products to detect them and clean them.

Every person has a role to play to prevent and/or reduce the impact of a cyber-plague. It may not kill millions of people but could make life quite uncomfortable.

Arthur T. Crosby
The author did a great concept and a great job with the details also. Ideas are refreshing.
More reviews
Escribe una opinión
About the Author