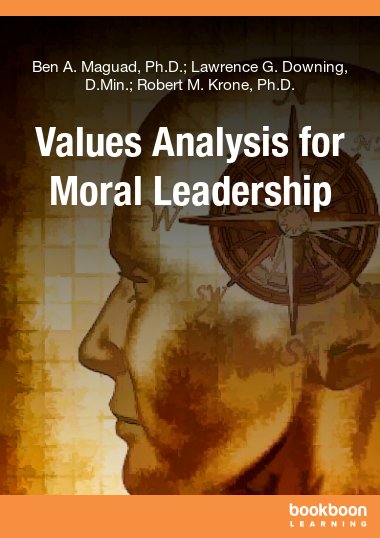 by Lawrence G. Downing, D.Min. Robert M. Krone, Ph.D. Ben A. Maguad, Ph.D.
Rating:
( 14 )
Write a review
70 pages
Language:
English
Organizational success cannot be achieved or sustained in a corrupt or dishonest system. Thus, there may be no more important subject today than pursuing the vision to achieve moral leadership.
This is a free eBook for students
Sign up for free access
Download free textbooks as PDF or read online. Less than 15% adverts
Free 30-day trial
Business subscription free for the first 30 days, then $5.99/mo
Share this title
Latest eBooks
About the author

LAWRENCE G. DOWNING, D.Min. Dr. Downing is a retired pastor who spent more than 40 years as a senior pastor in the Seventh-day Adventist Church. He also served for more than 15 years as an adjunct professor at La Sierra University Zapara School of Business and the H.M.S. Divinity Sch

Robert M. (Bob) Krone is Provost of Kepler Space Institute. He is a policy scientist, educator, research supervisor, author, and consultant in Space, Business, Management and Quality Sciences. He is an Emeritus Professor of the University of Southern California in Los Angeles, U.S.A. (1975-1993). He

Robert M. (Bob) Krone is Provost of Kepler Space Institute. He is a policy scientist, educator, research supervisor, author, and consultant in Space, Business, Management and Quality Sciences. He is an Emeritus Professor of the University of Southern California in Los Angeles, U.S.A. (1975-1993). He

More about Ben A. Maguad, Ph.D.
Get ahead at work with our collection of personal development eBooks
Download 1,700+ eBooks on soft skills and professional efficiency, from communicating effectively over Excel and Outlook, to project management and how to deal with difficult people.
Free 30-day trial Then $5.99/mo. Cancel at any time.
Description
Content

This book affirms the global need for moral leadership in the 21st century at a time when the risks to human survival have been increasing. What is particularly needed is leadership with ethical or moral behavior ingrained in its values system. People know that when they are not treated ethically and morally, bad things happen. They recognize that when crime or unethical acts are chosen, stable and productive lives are damaged and environments become destructive. They, therefore, prefer an environment where their lives proceed in constructive ways to improve the quality of life for themselves and others. In view of this, intentional immoral and unethical behavior for short-term gains should be identified and prevented from sowing seeds of destruction.

The authors believe that the purpose of moral leadership is to increase the quality of life for humanity by eliminating the huge tragic costs and wastes that inevitably results from immoral or unethical leadership. To evaluate and compare existing moral leadership with desired standards, they proposed the use of Values Analysis as the methodological tool powered by the Ideas Unlimited Group Survey Method which is able to penetrate the complexities Values Analysis presents.

Ethical and moral leadership is still the most critical variable that leaders must have to influence organizational behavior and performance. Quality cannot be achieved or sustained in an immoral, corrupt or dishonest system. The need for moral leadership will continue to increase with the ever increasing human and material costs of its failure. Hence, the onus is on leaders to take an active role in promoting positive values and practices in their organizations and communities.

A good way to teach moral leadership is via the Benefit-Cost Method by providing some examples of all the good that can occur when individuals or groups have high moral and ethical standards and contrast these with the destructiveness and misery which result from opposite cases. There may be no more important subject for teachers and students than the pursuit of the vision to achieve universal moral leadership.