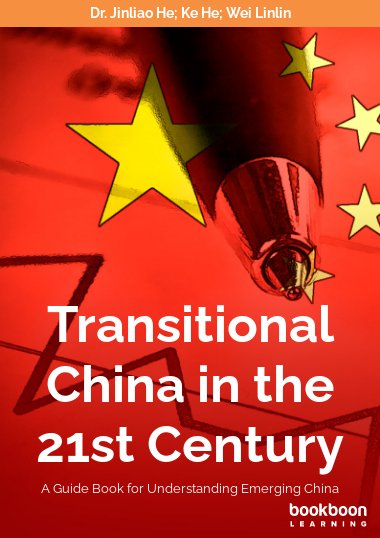 Transitional China in the 21st Century

After more than three decades’ rapid industrialization, China has been now in the great transition driven by new forms of economy, technologies, massive demographic mobility and transformation, as well as globalization tendency. The book provides international readers who are interested in the issue of emerging China with abundant colorful stories regarding to recent developments of China in three basic aspects of industrialization, urbanization and globalization. It exhibits the experiences that how China could made its transition from a manufacturing state to an innovation center, as well as the difficulties and challenges China is faced with in this process. Expectantly, the book can help international students to reach a holistic understanding of changing China.

Dr. Jinliao He is an Associate Research Fellow at the Research Center of Human Geography, Nanjing University. He is also the Chief Secretary of Sino-German Association for Green City (AAGC). He obtained his PhD degree in human geography at Heidelberg University in 2013. After that, he continued two years’ postdoc research at the same institute of Heidelberg University. His research interest lies in regional and urban policies for economic and sustainable development, creative industries and innovation networks.
As a junior researcher in human geography, he has over 20 publications in both international and national journals. He is the author for 3 books, including the monograph Creative Industry District: An Analysis of Dynamics, Networks and Implications of Creative Industrial Clusters in Shanghai published by Springer. He is also the review expert for several international journals, including European Planning Studies, Environmental and Planning B, Sociology Studies.

Ke He is a Chinese lecturer at Faculty of International Studies, Prince of Songkla University, Phuket Campus, Thailand. He obtained his Master degree in History of International Relations at Shanghai University in 2009. In 2008, he joined the Volunteer Chinese Teacher Program conducted by Hanban and worked for Confucius Institue at Phuket for three years. After that, he stayed at Phuket and became a university teacher. His research interest lies in traditional Chinese medicine and Philosophy, overseas Chinese and “the Belt and Road Initiatives”. He has 8 publications in both international and national journals. He is also a reviewer for Journal of Faculty of International Studies, Prince of Songkla University.

Linlin Wei is an urban planner and is now a PhD candidate at Technical University Darmstadt, Germany. Her research interest lies in urban green and open space planning, especially on the planning and design of urban green infrastructure and the efficiency of urban ecosystem services provision.