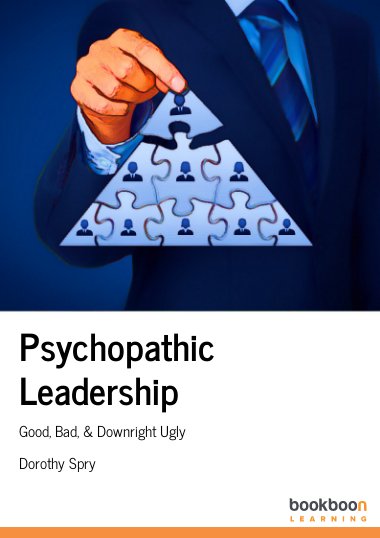 by Dorothy Spry
0 Reviews
44
Language:  English
This e-book contributes to the literature regarding the disturbing number of “white collar psychopaths” present within organisations today.
Sign Up
Professional Plus subscription free for the first 30 days, then $8.99/mo
Buy the eBook :
Access to this title on the bookboon platform
Share
Description
Content

Dorothy’s empathic approach and enthusiasm about her work has provided her with opportunities to be invited to Europe, the USA and UAE providing specialist accreditations and training. She is also a guest speaker talking to Medical and MBA students on Emotionally Intelligence – What you need besides qualifications in the workplace.

Dorothy graduated with a BSc in Psychology at Goldsmith’s University, London, in 1992, and from there she undertook an MSc in Organisational Psychology which provided her with a solid foundation of both theory and practice of how best to help organisations and the people that work there to function in a healthy and productive manner.

In 2007, Dorothy’s work in helping others was recognised by winning the UK National Training Award. She has authored several books on various topics from Psychometric Testing, Coaching, Cognitive Behavioural Coaching for Anger Management, Psychopathic Leadership – The Good, Bad and Downright Ugly and Star Performers – How Emotional Intelligence Can Enhance your Career.

Dorothy is based in the UK.