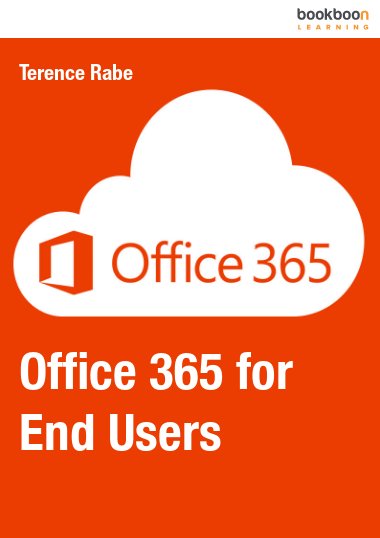 by Terence Rabe
0 Reviews
289
Language:  English
This user guide will help you use Office 365 to communicate and collaborate with other Office 365 users in your organisation and beyond.
Sign Up
Professional Plus subscription free for the first 30 days, then $8.99/mo
Buy the eBook :
Access to this title on the bookboon platform
Share
Content
Description

This user guide will help you use Office 365 to communicate and collaborate with other Office 365 users in your organisation and beyond.
Each chapter covers an Office 365 feature using clear explanations, meaningful illustrations and step-by-step instructions that will help you learn how to perform essential tasks in Office 365.

You will learn how to:

In 2001 Terence emigrated to the United Kingdom and continued to deliver technical training on Microsoft operating systems and server products. It was during this time that he first encountered SharePoint and BPOS, the forerunner to Office 365, and saw the potential these tools have for transforming the way people work.

In 2011 he started his own company with a goal to become a trusted independent provider of consultancy and training services on SharePoint, Office 365, and other cloud-based Microsoft technologies.