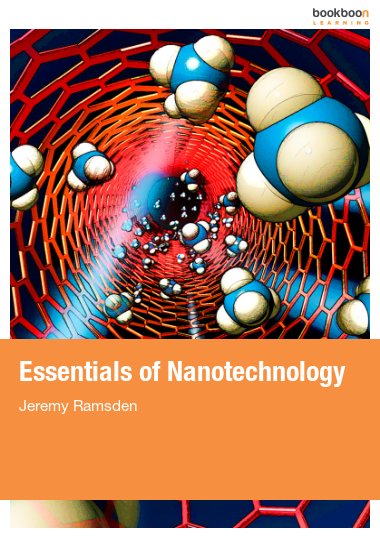 by Jeremy Ramsden
Rating:
( 32 )
Write a review
126 pages
Language:
en
Essentials of Nanotechnology provides an up-to-date overview of this fast-changing field. Essentials of Nanotechnology is an ebook to download free of charge.
This is a free eBook for students
Sign up for free access
Download free textbooks as PDF or read online. Less than 15% adverts
Free 30-day trial
Business subscription free for the first 30 days, then $5.99/mo
Share this title
Latest eBooks
About the author

Jeremy Ramsden obtained his bachelor's and master's degrees in natural sciences (comprising physics, chemistry, biochemistry, cell biology and mathematics) from Cambridge University (UK). While he was a master's student he carried out pioneering research on silver halide nanoparticles as a staff scien

More about Jeremy Ramsden
Get ahead at work with our collection of personal development eBooks
Download 1,700+ eBooks on soft skills and professional efficiency, from communicating effectively over Excel and Outlook, to project management and how to deal with difficult people.
Free 30-day trial Then $5.99/mo. Cancel at any time.
Description
Content

Nanotechnology is an exciting and innovative field that addresses matter, and the manipulation of matter, at the atomic scale. Nanotech, as it’s often called, is considered to be the current technological revolution, following on the heels of the information revolution.

Written by Dr. Jeremy Ramsden, this ebook provides a complete look at nanotech—its history, its current usage, and it’s direction. Because the field of nanotechnology is advancing so rapidly, and keeping up to date is challenging, the author has included resources for further reading.

With nanotechnology, raw materials like nanoparticles, nanofibres, and graphenes are used to make things, such as nanodevices. These small machines may be electronic, magnetic, photonic, mechanical, fluidic, or biomedical. Creating these nanodevices requires atomic-scale manufacturing, or nanofacture.

Other exciting applications are bionanotechnology, which uses DNA as construction material, and nanomedicine, which may enable tiny machines to repair our bodies.

Welcome to this Study Guide to nanotechnology.

Nanotechnology is widely considered to constitute the basis of the next technological revolution, following on from the first Industrial Revolution, which began around 1750 with the introduction of the steam engine and steelmaking (and which parallelled, or perhaps caused, upheavals in land ownership and agriculture practice). The Industrial Revolution constituted as profound a change in society and civilization as the earlier Stone, Bronze and Iron revolutions, each of which ushered in a distinctly new age in the history of human civilization. A second Industrial Revolution began around the end of the 19th century with the introduction of electricity on an industrial scale (and which paved the way for other innovations such as wireless communication), and most recently we have had the Information Revolution, characterized by the widespread introduction of computing devices and the internet.

Insofar as the further development of very large-scale integrated circuits used for information processing depends on reducing the sizes of the individual circuit components down to the nanoscale (i.e., a few tens of nanometres), the Information Revolution has now become the Nano Revolution—just as steam engines powered dynamos for the industrial generation of electricity. But, nanotechnology brings its own distinctive challenges, notably: (i) handling matter at the atomic scale (which is what nanotechnology is all about—a synonym is “atomically precise engineering”) means that qualitatively different behaviour needs to be taken into account; and (ii) in order for atomically precisely engineered objects to be useful for humans, they need to be somehow multiplied, which introduces the problem of handling vast numbers of entities.

One should not underestimate the multidisciplinary nature of nanotechnology. This forces researchers to adopt a manner of working more familiar to scientists in the 19th century than in the 21st. Many active fields in nanotechnology research demand an understanding of diverse areas of science. Sometimes this problem is solved by assembling teams of researchers but members of the team still need to be able to effectively communicate with one another. An inevitable consequence of this multidisciplinarity is that the range of material that needs to be covered is rather large. As a result, some topics have had to be dealt with rather sketchily in order to keep the size of this book within reasonable bounds, but I hope I may be at least partly excused for this by the continuing rapid evolution of nanotechnology, which in many cases would make additional details superfluous since their relevance is likely to be soon superseded. Fundamental discoveries will doubtless continue to be made in the realm of a very small—and given the closeness of discoveries to technology in this field, in many cases they will doubtless be rapidly developed into useful products.

References to the original literature are only given (as footnotes to the main text) when I consider the original article to be seminal, or that reading it will bring some additional illumination. At the end of each chapter I list some (mostly relatively short) authoritative review articles (and a few books) that could be usefully read by anyone wishing to go into more detail. These lists do not include standard texts on topics such as the general properties of matter, electricity and magnetism, optics, quantum mechanics, and so forth.