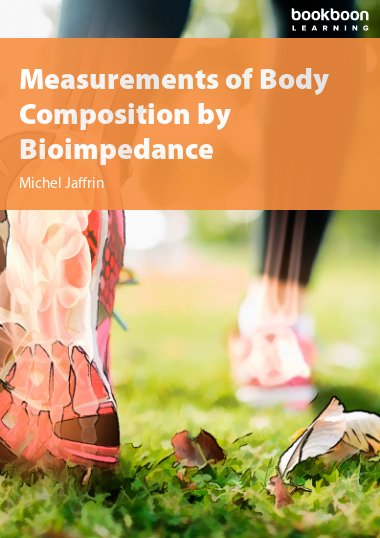 Measurements of Body Composition by Bioimpedance

The measurements of body composition, fat mass, fat-free mass, muscle mass, total body water, extra and intracellular waters are important to evaluate your health. These measurements can be made with simple devices, called impedance meters which provide the hand-to-foot resistance or the foot-to-foot one. The knowledge of these resistances together with body height, weight and age permit to calculate fat mass (FM), or fat-free-mass (FFM), total body water (TBW), extracellular (ECW) and intracellular water (ICW). The 1st and 2nd chapters present the various types of medical impedance meters used in supine position with four adhesive electrodes on hand and foot and foot-to-foot ones (FFI) used in standing position with electrodes on a body scale. The introduction in 2003 of Japanese and Korean eight electrode impedance meters with four plantar and four hand electrodes permit to measure limb FM and FFM in standing position in a single operation. The 3rd chapter presents the main applications of impedance meters described in the relevant literature, which cover FFM, FM, TBW, ECW and ICW, together with measurements by Dual X-Ray absorptiometry which can be considered as a reference method. The 4th chapter describes methods for increasing the accuracy of FFI by optimizing electrodes design. The discussion in the 5th chapter evaluates the error in FM caused by inaccurate resistance measurements. The 6th chapter concludes that the advantage of FFI over medical devices is that they permit rapid impedance and weight measurements. But their design should facilitate the reproducibility of correct heels position on the scale for better accuracy.

Michel Jaffrin was born in Nice (France) on 11 June 1938. He obtained his Engineering degree from the National School of Aeronautics in Paris in 1960 and a PhD from Brown University (Providence, RI, USA) in February 1964 with a thesis on shock waves in ionosphere, while being a researcher at MIT in Boston. He was a research engineer at ONERA (Office National d’Etudes et Recherches Aérospatiales) and later at Alcatel Lucent. He returned to MIT as associate professor from 1967 to 1973 to work in biofluid mechanics, peristaltic flows, blood rheology, gas flow in lungs. He returned to France in September 1973 to participate in the creation of the University of Technology of Compiegne (UTC). He contributed to the development of Biomedical Engineering (artificial organs, fluid mechanics, membrane processes and teaching). He has also been teaching fluid mechanics at the Polytechnic School (Palaiseau) part-time from 1984 to 1996. He was appointed in 1997 as senior member of Institut Universitaire of France until 2006, and he is now an honorary member.

He is presently emeritus professor at UTC where he continues his research on membrane filtration, artificial organs, measurement of body composition by bioimpedance (fat mass, lean body mass and body water).