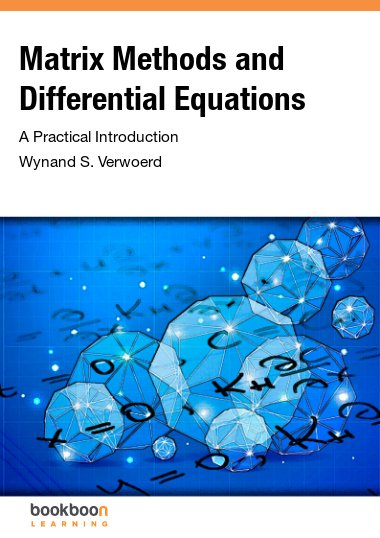 This book is aimed at students who encounter mathematical models in other disciplines. It assumes some knowledge of calculus, and explains the tools and concepts for analysing models involving sets of either algebraic or 1st order differential equations. The text emphasises commonalities between these modelling approaches.

The approach is practical, aiming at insight to understand the mathematical principles, but recognising that real world modelling uses computer algebra software. Hands on exploration is supported by giving software commands interspersed in the text, as well as their output.

Wynand started his professional life with a PhD in Theoretical Physics and taught a variety of courses to Physics students since 1972 at the University of Pretoria, before being appointed as professor at the University of South Africa in 1980. His main research interest in this period was the application of molecular modelling methods to understand the structure and properties of semiconductor surfaces. In pursuit of this he spent several extended research stays in Europe: at the University of Paris; two stays with a Alexander von Humboldt fellowship at the University of Clausthal, and at Woolfson College of Oxford University. For variety he punctuated this by the occasional consulting contract as applied mathematician in fields ranging from engineering to orthodontics.

A sabbatical stay at the University of Otago convinced him of the charms of New Zealand, where he moved in 1998. At the same time he switched fields to computational modelling, and was awarded a second PhD in Computational Systems Modelling for work on stochastic differential equation modelling of porous media by Lincoln University in Christchurch. A further course of direction led to his present appointment as senior lecturer in Computational Biology at Lincoln University, where he currently does research on modelling of metabolic networks in cell molecular biology.