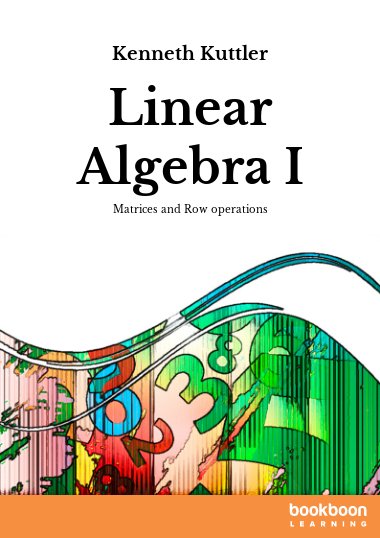 This consists of the elementary aspects of linear algebra which depend mainly on row operations involving elementary manipulations of matrices. The field of scalars is typically the field of complex numbers.

Kenneth Kuttler received his Ph.D. in mathematics from The University of Texas at Austin in 1981. From there, he went to Michigan Tech. University where he was employed for most of the next 17 years. He joined the faculty of Brigham Young University in 1998 and has been there since this time. Kuttler's research interests are mainly in the mathematical theory for nonlinear initial boundary value problems, especially those which come from physical models that include damage, contact, and friction. Recently he has become interested in stochastic integration and the related problems involving nonlinear stochastic evolution equations.