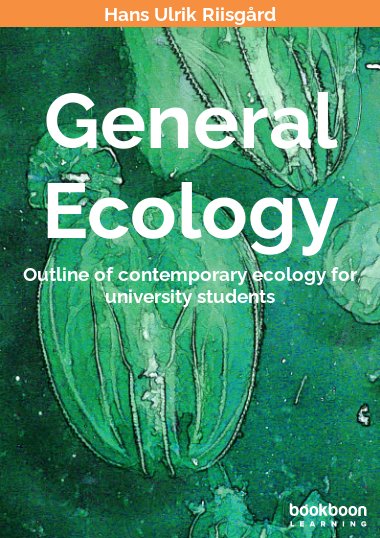 by Hans Ulrik Riisgård
Rating:
( 14 )
Write a review
152 pages
Language:
English
This book meets the need for a concise textbook of ecology for university students without special biological knowledge.
This is a free eBook for students
Sign up for free access
Download free textbooks as PDF or read online. Less than 15% adverts
Free 30-day trial
Business subscription free for the first 30 days, then $5.99/mo
Share this title
Latest eBooks
About the author

More about Hans Ulrik Riisgård
Get ahead at work with our collection of personal development eBooks
Download 1,700+ eBooks on soft skills and professional efficiency, from communicating effectively over Excel and Outlook, to project management and how to deal with difficult people.
Free 30-day trial Then $5.99/mo. Cancel at any time.
Description
Content
Reviews

Thomas
Great insightful reading!
Tom Fenchel, Emeritus Professor
The book provides a comprehensive treatment of ecological science and concepts. It is primarily intended as a textbook at an elementary university level. The first (largest) part of the book represents a rather complete treatment of the various aspects of general ecology including population biology, interactions between different species populations and community ecology, bioenergetics, element cycling and biogeochemical aspects. This part provides a rather complete introductory treatment of a diverse field of science and it is presented at a suitable level for first or second year biology students. The second part of the book presents more detailed treatment of marine, freshwater, and terrestrial (that is forest) ecosystems. The book covers general ecology, it is largely up-to-date, and it is well illustrated. The text contains relevant citations that are correct and used consistently. The book is comprehensible for students at an elementary level; I found that the author has taken this aspect seriously.
PRINCESS TI
JUST GREAT.
A very good detailed book.
MSKamran
Very helpful and good understanding of environment and human interaction.
More reviews
Write a review