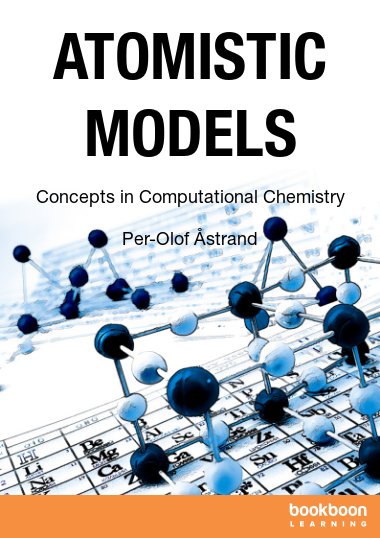 Chemical modeling on the atomistic scale has become a general tool in chemistry research, but it is not always easy to understand the limitations of the applied methods or to interpret the results. Here, the concepts of computational chemistry is introduced on the M.Sc./Ph.D. level (basic knowledge in physical chemistry is assumed). The focus is on the user's perspective, the concepts needed to use computational chemistry in state-of-the-art research, and not on the method developer's perspective as efficient algorithms or software implementation.

This first edition includes chapters on computational quantum chemistry and force-field methods, whereas chapters on statistical thermodynamics and molecular simulations will be included in the next edition.

Per-Olof Åstrand was born in Sätila in western Sweden in 1965 and grew up in Tygelsjö just south of Malmö in the very southern part of Sweden. After a compulsory military service, he moved to Lund in 1985 to study at Lund University for a degree in chemical engineering which was completed in 1990. He then started on a Ph.D. degree in theoretical chemistry with Gunnar Karlström as thesis supervisor and Anders Wallqvist as cosupervisor. His thesis work was on the development of the polarizable force field named NEMO, and the Ph.D. thesis included also theoretical work on far infrared spectroscopy in collaboration with Anders Engdahl and Bengt Nelander as well as molecular dynamics simulations with Per Linse and Kurt V. Mikkelsen using the NEMO force field.

In 2002, he was appointed as full professor in computational chemistry at the Norwegian University of Science and Technology (NTNU) in Trondheim, Norway and he thereby moved to his third Scandinavian country. He has been teaching molecular modeling and computational chemistry since 2002. In 2008, he established a new chemistry-oriented course for the new nanotechnology engineering program in statistical thermodynamics, which he has been teaching since then. He is also giving a biannual Ph.D. course in advanced molecular modeling with a focus on the theory of intermolecular forces, the connection between force fields and quantum mechanics as well as the connection between microscopic and macroscopic polarization.