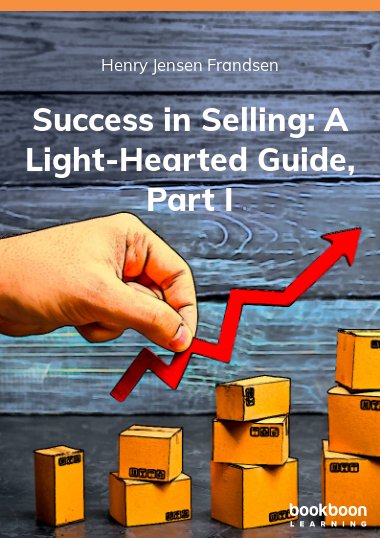 Success in Selling: A Light-Hearted Guide, Part I

by Henry Jensen Frandsen
17 Anmeldelser
(17 ratings)
1 home.book.review
66
Language:  English
This is a light-hearted read “with a punch”. It is filled with short stories and is a "Must-Read" for anyone involved in selling.
Sign Up
Professionel Plus abonnementet gratis de første 30 dage, derefter $8.99 /måned
Køb e-bogen:
Læs denne bog i vores online eReader. Ingen reklamer
Share
Beskrivelse
Indhold
Anmeldelse

This is a light-hearted read “with a punch”. It is filled with short stories about humorous experiences that sales people have found themselves caught up in over the years. It is a "Must-Read" for anyone involved in selling.

This book was specifically written to inspire sales people. It can be used as a motivational tool to encourage and raise the level of sales personnel. It is a stimulating and thought-provoking manuscript. You can read a chapter of this book as a highlight before finishing off a sales meeting. The idea is to read a chapter and then conduct a question and answer session encouraging the sales team to debate the moral of the story.

Des Rudolph was the GM at Musikland who I reported to back in 1977. He had a huge influence on my career. He embedded the phrase "Make it Happen" into my brain and into my life. He also pointed out that when reading a motivational book and only one line in the entire book makes you think, then that book is worth every cent you paid for it.

Here's hoping that you find that 'One liner' in this book.

Andbrew
An easy reading book filled with stories that tell how it can be done rather than judgementally tell you what you're doing wrong. Worth a second read.
More reviews
Skriv en anmeldelse
About the Author

Henry Jensen Frandsen was born in Brakpan on the 25th February 1944.

In 1976 Henry Joined Musikland in Kwa Zulu Natal as Promotions and Marketing Officer. A few years later he was appointed General Manager.

In 1978 Henry and Kevin James, opened a packaging distribution company, Shaft Packaging his son was born in 1979. Sixteen years later Henry sold his shares to his partner Henry Smith.

Henry and Hilton Taljaard designed a collapsible bulk container which won a Silver award at the packaging industries “GoldPack Awards".

With Mark Rawlins and Andrew Gourley; he formed the company “Wave Paper” where Henry pursued his environmentally friendly interest of creating paper pulp products to replace timber pallets and timber dunnage in the shipping industry. In 1995 Henry sold his shares in Wave Paper to Mondi Paper Group.

Henry, and his daughter Leigh, ventured back into the packaging distribution industry and formed a company “Simply Packaging”. After a year, Henry was approached by an investor to expand the business. He relocated to larger premises in Johannesburg to house a Plastic Extrusion Plant. Branches of Simply Packaging were opened in Durban and Cape Town. The investor withdrew his investment which caused the collapse of the company.

Henry lives in Cedar Lake Estate, Johannesburg with his wife Patric; he has a loving daughter Leigh who is married to Brian Watson, a guy he is proud to call his son. They have produced two adorable grandchildren in Adam Jensen Douglas and Emma Patric Avril. Henry’s Son, Neil Jensen is married to Lauren (Stephen) who, like Brian, is definitely another daughter to Henry. They have provided Henry with two stunning grandsons, Luke Lyle and Daniel Jensen. Both Henry’s son and daughter and their families have since emigrated to Auckland, New Zealand.