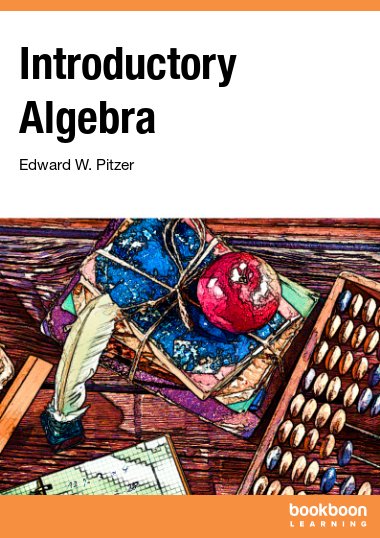 Introductory Algebra is a primer for students considering an entrance level college algebra course. The textbook should not be considered a comprehensive treatment of algebra. The goal of the textbook is to teach a set of problem solving skills in some of the more fundamental areas of algebra.

The author uses a step-by-step problem solving technique that is demonstrated in an exacting format. These formats can often take an entire page to demonstrate the solution to a problem. Additional examples of problems are worked out completely using the exact problem solving format originally demonstrated.

Edward W. Pitzer is an Assistant Professor of Chemistry and Mathematics at Marian University in Indianapolis, Indiana in the USA.

Professor Pitzer’s specialty is introductory courses in chemistry and mathematics for non-science and non-mathematics majors.

His present research interest is in the pedagogical construct of these non-major courses. He insists that making a non-science major excited about, or at least intrigued by, a science or mathematics course is a worthwhile effort.