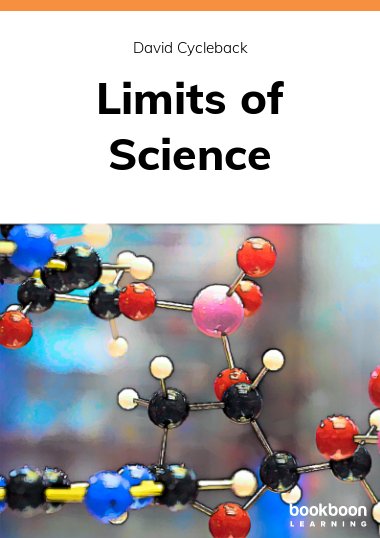 This philosophy of science book examines the scope, purpose and methodology of science, and areas of the universe, reality and knowledge that lay beyond its scope. Science itself and scientists themselves say that there are important areas, topics and questions, including within and about science, that cannot be answered and often even addressed by science’s tools of sensory observation, empirical testing and logic.

David Cycleback is Director of Center for Artifact Studies, and an internationally known scholar working in cognitive science, philosophy and artifacts history,. He was runner-up for the International Book Award for Philosophy for Noise Music: Cognitive Psychology, Aesthetics and Epistemology and a four-time Eric Hoffer Award Finalist. In their second printing by China's National Photographic Art Publishing House, his guides Judging the Authenticity of Prints by the Masters and Judging the Authenticity of Photographs were the first comprehensive books on the subjects published in Asia, and Art Perception is one of four books students are recommended to study in preparation for India's Common Entrance Exam for Design (CEED) for postgraduate studies in technical design. He has been a practicum coordinator for the University of Washington, an authenticity researcher for Arizona State University's Society for American Baseball Research, and is a member of the Oxford University Philosophical Society and the International Society for Philosophers. His other books include Cognitive Science of Religion and Belief Systems, Understanding Human Minds and Their Limits, Limits of Science, Philosophy of Artificial Intelligence, and Authenticating Art and Artifacts: An Introduction to Methods and Issues.