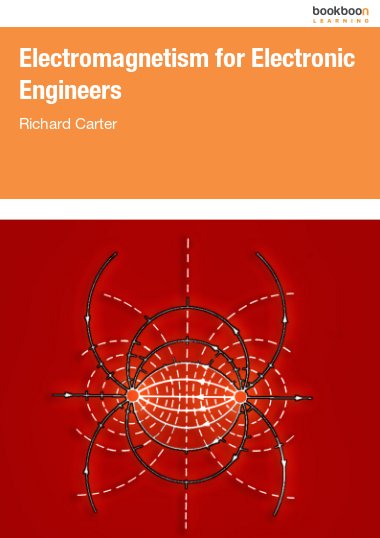 This introduction to electromagnetic theory emphasises on applications in electronic engineering. The book explores the relationship between fundamental principles and the idealisations of electric circuit theory. Attention is drawn to the effects of parasitic capacitance and inductance, to electromagnetic screening and to the effects of propagation delay. The text includes numerical and approximate methods for calculating resistance capacitance and inductance. With its clear presentation of both theoretical and practical topics this is an ideal introductory text for degree students.

Click here to download the slides for this book. These slides are arranged as ten lectures which cover the material in the Author's book Electromagnetism for Electronic Engineers. The pack includes some supplementary material. They are the result of nearly 40 years experience of teaching this subject to electrical and electronic engineering students at Lancaster University (UK).

Electromagnetism is fundamental to the whole of electrical and electronic engineering. It provides the basis for understanding the uses of electricity and for the design of the whole spectrum of devices from the largest turbo-alternators to the smallest microcircuits. This subject is a vital part of the education of electronic engineers. Without it they are limited to understanding electronic circuits in terms of the idealizations of circuit theory.

The book is, first and foremost, about electromagnetism, and any book which covers this subject must deal with its various laws. But you can choose different ways of entering its description and still, in the end, cover the same ground. I have chosen a conventional sequence of presentation, beginning with electrostatics, then moving to current electricity, the magnetic effects of currents, electromagnetic induction and electromagnetic waves. This seems to me to be the most logical approach.

Authors differ in the significance they ascribe to the four field vectors E, D, B and H. I find it simplest to regard E and B as ‘physical’ quantities because they are directly related to forces on electric charges, and D and H as useful inventions which make it easier to solve problems involving material media. For this reason the introduction of D and H is deferred until the points at which they are needed for this purpose.

Secondly, this is a book for those whose main interest is in electronics. The restricted space available meant that decisions had to be taken about what to include or omit. Where topics, such as the force on a charged particle moving in vacuum or an iron surface in a magnetic field, have been omitted, it is because they are of marginal importance for most electronic engineers. I have also omitted the chapter on radio-frequency interference which appeared in the second edition despite its practical importance.

Thirdly, I have written a book for engineers. On the whole engineers take the laws of physics as given. Their task is to apply them to the practical problems they meet in their work. For this reason I have chosen to introduce the laws with demonstrations of plausibility rather than formal proofs. It seems to me that engineers understand things best from practical examples rather than abstract mathematics. I have found from experience that few textbooks on electromagnetism are much help when it comes to applying the subject, so here I have tried to make good that deficiency both by emphasizing the strategies of problem-solving and the range of techniques available. A companion volume is planned to provide worked examples.

Most university engineering students already have some familiarity with the fundamentals of electricity and magnetism from their school physics courses. This book is designed to build on that foundation by providing a systematic treatment of a subject which may previously have been encountered as a set of experimental phenomena with no clear links between them. Those who have not studied the subject before, or who feel a need to revise the basic ideas, should consult the elementary texts listed in the Bibliography.

The mathematical techniques used in this book are all covered either at A-level or during the first year at university. They include calculus, coordinate geometry and vector algebra, including the use of dot and cross products. Vector notation makes it possible to state the laws of electromagnetism in concise general forms. This advantage seems to me to outweigh the possible disadvantage of its relative unfamiliarity. I have introduced the notation of vector calculus in order to provide students with a basis for understanding more advanced texts which deal with electromagnetic waves. No attempt is made here to apply the methods of vector calculus because the emphasis is on practical problem-solving and acquiring insight and not on the application of advanced mathematics.

I am indebted for my understanding of this subject to many people, teachers, authors and colleagues, but I feel a particular debt to my father who taught me the value of thinking about problems ‘from first principles’. His own book, The Electromagnetic Field in its Engineering Aspects (2nd edn, Longman, 1967) is a much more profound treatment than I have been able to attempt, and is well worth consulting.

I should like to record my gratitude to my editors, Professors Bloodworth and Dorey, of the white and red roses, to Tony Compton and my colleague David Bradley, all of whom read the draft of the first edition and offered many helpful suggestions. I am also indebted to Professor Freeman of Imperial College and Professor Sykulski of the University of Southampton for pointing out mistakes in my discussion of energy methods in the first edition.

Finally, I now realize why authors acknowledge the support and forbearance of their wives and families through the months of burning the midnight oil, and I am most happy to acknowledge my debt there also.