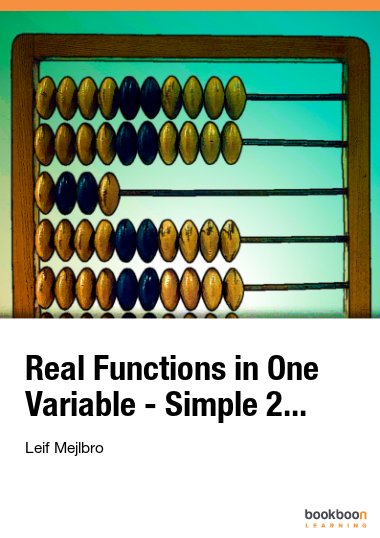 Real Functions in One Variable - Simple 2...

In this volume I present some examples of Simple Differential Equations II, cf. also Calculus 1a, Functions of One Variable. Since my aim also has been to demonstrate some solution strategy I have as far as possible structured the examples according to the following form

A Awareness, i.e. a short description of what is the problem.

D Decision, i.e. a reflection over what should be done with the problem.

I Implementation, i.e. where all the calculations are made.

C Control, i.e. a test of the result.

This is an ideal form of a general procedure of solution. It can be used in any situation and it is not linked to Mathematics alone. I learned it many years ago in the Theory of Telecommunication in a situation which did not contain Mathematics at all. The student is recommended to use it also in other disciplines.

One is used to from high school immediately to proceed to I. Implementation. However, examples and problems at university level are often so complicated that it in general will be a good investment also to spend some time on the first two points above in order to be absolutely certain of what to do in a particular case. Note that the first three points, ADI, can always be performed.

This is unfortunately not the case with C Control, because it from now on may be difficult, if possible, to check one’s solution. It is only an extra securing whenever it is possible, but we cannot include it always in our solution form above.

It is my hope that these examples, of which many are treated in more ways to show that the solutions procedures are not unique, may be of some inspiration for the students who have just started their studies at the universities.

Finally, even if I have tried to write as careful as possible, I doubt that all errors have been removed. I hope that the reader will forgive me the unavoidable errors.